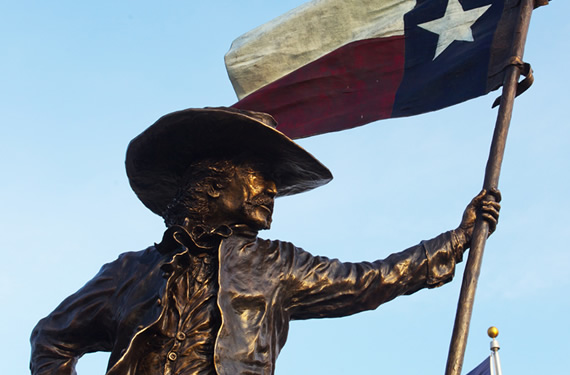 As first reported by Shawn Arrajj at ‘Community Impact’ on July 6, 2012

The Lone Star Flag flies proudly across Texas as a symbol of hard-fought independence. Although the flag has meaning for every Texan, history traces its birth back to the Montgomery County area.

The flag was designed by Dr. Charles B. Stewart—political leader and second person to sign the Texas Declaration of Independence—following the conclusion of the Texas Revolution in 1836. He designed it in Montgomery County, which is recognized as its official birthplace. The colors, the same as the American flag, were described as white, “Old Glory Red” and “Old Glory Blue.” The Lone Star represents Texas.

It was adopted as the national flag by the Republic of Texas in 1839. It became the official state flag on Dec. 29, 1845, when Texas entered the union as the 28th state.
Although the Lone Star Flag has become the iconic symbol of Texas, the story behind the revolution involves more than 30 different banners that were flown during the war, said Jim Walker, vice president of the Friends of the Flag Foundation in Conroe.

“All these people started gathering together to support Texas from different parts of the country—Georgia, Alabama, New Orleans,” he said. “They all had different banners, and they all played a role in our history.”

Notable flags include the 1835 Tri-color flag flown when the Constitutional Convention met to declare independence from Mexico. This was the first appearance of the Lone Star as a representation of the state. The 1835 Gonzalez flag—flown at the Battle of Gonzalez—was where the phrase “come and take it” was used as a challenge to the Mexicans.
Walker, with the help of local artist Craig Campobella, opened the Lone Star Flag Park in Conroe in April 2011. Featuring the 13 most significant flags from the revolution, the project was meant to educate people on the complete history of the Lone Star Flag.

“We want you to be able to go around and get enough of a snapshot of each flag that, by the time you get to the Lone Star Flag and walk back down the steps, you have a very deep understanding of why it happened, who was involved and how we got here,” Campobella said.

Campobella said he wants the park to serve two main purposes: to educate and to honor those who fought.

“To take the time to remember these people that did these remarkable things is not only the decent thing to do, it’s the right thing to do,” he said.

Craig Campobella, Conroe resident and professional sculptor, conceptualized the park in 2005 while driving along I-45 past the park’s future site. He got a vision for what it would look like, which he transcribed into the drawing the park was based on.

The park features the 13 flags from the Texas revolution circling a sculpture called “The Texian,” which represents the common Texan soldier that fought.