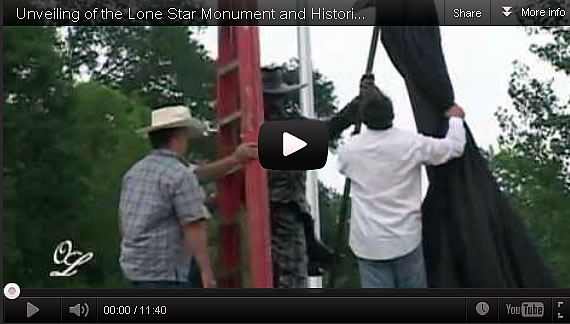 Many cities and historic sites in Texas are honoring their heritage this spring as the state celebrates the 175th anniversary its independence, and the city of Conroe is unveiling a new park dedicated to state history. It’s doing so April 21, San Jacinto Day, the anniversary of the 1836 battle that led to Texas independence.

For years, Conroe has dreamed of a monument to honor Montgomery County as the birthplace of the Lone Star flag. Dr. Charles B. Stewart, a Montgomery County resident who signed the Texas Declaration of Independence, designed the flag at the request of Mirabeau B. Lamar, president of the Republic of Texas. The banner was officially designated the state flag in 1839. It became the official state flag in 1845, when Texas joined the union.

In 1997, the Texas House of Representatives passed a resolution designating Montgomery County as the birthplace of the Lone Star flag. And this month, Lone Star Monument and Historical Flag Park will open next to Montgomery County Central Library in Conroe.

The monument at the 3.5-acre park is a circular landscaped plaza surrounded by 13 flags that flew in Texas as the region fought for independence during the Texas Revolution. At the center of the plaza is The Texian, a 14-foot-tall bronze sculpture by Conroe artist Craig Campobella. The statue depicts an everyman volunteer soldier of the Texas Revolution.

The dedication starts at 5:30 p.m. April 21. Afterward, a free concert will star country singer Gary P. Nunn and other musicians. The park is at I-45 and FM2854.