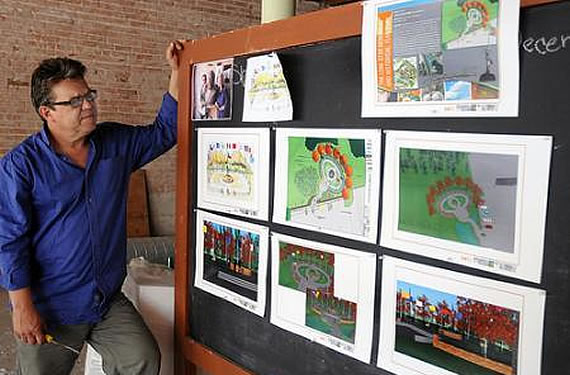 Artist Craig Campobella, of Conroe, examines the drawings for the new flag park.

Conroe resident and sculptor Craig Campobella has a few months to go before his latest work of art will be ready for the foundry, but as he smooths his hands over the 14-foot tall form, there’s no mistaking it’s the shape of a male. Cast in bronze, the man is wearing a jacket with tails, a vest, boots, and a sash tied on the right hip – because Campobella is determined to be historically accurate. Every other army in the world tied their sashes on the left hip. He is the “Texian,” and he represents the myriad of men who fought for independence during the Texas Revolution.

The Texian will be the focal point of the Lone Star Monument Historical Flag Park in Conroe, slated to open April 21, 2011, which is San Jacinto Day. “It will be like an outdoor museum,” Campobella said. “When people walk through this park, they will get a capsule of history from Gonzales all the way to the designing of the Lone Star flag.”

The Texian will be holding the Lone Star Flag, also cast in bronze, and behind him, on 35-foot flagpoles, will be 13 “important battle and rally flags” that flew over the state during the Texas Revolution. Campobella said the Texian stands proud and is looking to the horizon as if to say “Come and take it!” That is in fact of one of the 13 flags. The Gonzales flag of 1835 is thought to be the first flag of the Texas revolution.According to the flag park’s Web site, it’s claimed the phrase “come and take it” was the Texans’ reply to a request to give up a cannon that had been borrowed from a Mexican garrison. There is also the pure red flag of the Alabama Red Rovers, said to be the banner of a company of volunteers from Alabama who aided Texan forces. Most of the Red Rovers were killed in the Goliad battle on March 27, 1836. Other flags include the Alamo 1824, one of the flags that flew at the Alamo for 13 days as a couple hundred Texans held off a Mexican army of thousands; and the San Jacinto Flag 1836, representing the 18-minute battle followed by the capture of Santa Anna. At the base of each pole will be a plaque describing the flag. At the entrance to the park will be a granite bust of Charles B. Stewart, who lived in Montgomery and created the Lone Star flag.

While the City of Conroe has agreed to pay for the construction of the park, it will be up to a nonprofit group called Friends of the Flag to pay for things like the replacement of frayed or discolored flags. “We will watch over those flags and make sure they stay in pristine condition,” Campobella said. It can cost up to $3,000 to replace all 13, Campobella said, which is why he formed Friends of the Flag, the public awareness and fundraising arm of the Lone Star Monument Historical Flag Park. The flags will need to be replaced approximately every six months.
Kathleen Rowland is up for the task despite a sluggish economy. “The way our economy is today is not as important as having a long-term goal on how we will raise money,” said Rowland, who lives in a Lake Conroe community. “We just have to find a tie-in to fundraisers that relate to what the project is. Rowland, a good friend of Campobella’s, said she became a member of Friends of the Flag because Campobella’s enthusiasm for the project was contagious. “I am not one of the knowledgeable ones, but I did start learning more about Texas history,” Rowland said, “and now that’s part of what keeps me interested.” Bentwater resident Dave Clements is also giving his time as a member of Friends of the Flag. As a freelance photographer, Clements is documenting the entire process, capturing every significant moment that began with city council approval and will climax with the park’s grand opening. “I like the idea of trying to nurture our community,” Clements said. “This park will allow for generation after generation to learn about the history of Texas.”

“When people walk through the park, they will get a capsule of Texas history from Gonzales all the way to the designing of the Lone Star flag.” Craig Campobella, founder of Friends of the Flag

Flags of the Texas Revolution: