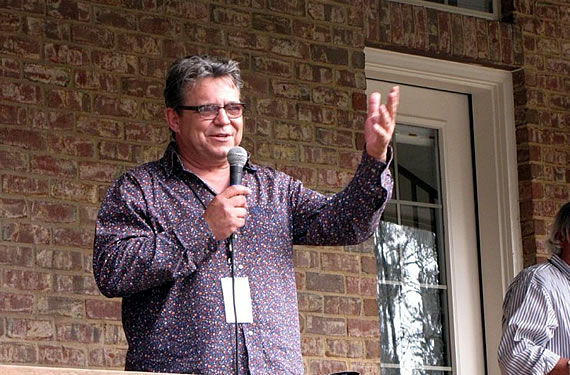 Artist Craig Campobella, creator of “The Texian,” a bronze sculpture to be unveiled April 21 in the Lone Star Monument and Historical Flag Park, adjacent to the central library in Conroe, addressed supporters March 13 at the home of Dean and Sara Bass.

In remembrance of March 6, 1836, the sounds of exploding muskets and a cannon roared across the meadow of DEAN and SARA BASS’ estate. Nearby stood a young girl and a woman clad in pioneer garb.

It is painful to imagine that last battle at the Alamo: The shrieks, the acrid smoke, the deadly twilight of gun powder, the knowing that your fate is sealed, hour after agonizing hour, and always, the trust that this sacrifice will not be in vain.

I peeked at the tranquil sky, remembering those whose blood bought today; thankful that this was not the Alamo in 1836.

The re-enactment happened at an assemblage of Texas-loving patriots gathered Sunday at the spacious Bass estate off Honea Egypt Road.

Guests were invited to learn more about the LONE STAR MONUMENT AND HISTORICAL FLAG PARK, set to open on Texas Independence Day, April 21; and about the FRIENDS OF THE FLAG FOUNDATION, INC.

Mission of the FOTFF is to promote the park, and to insure that the 13 flags to be raised there remain bright and unblemished, replaced as needed.

Current Conroe Mayor WEBB MELDER and First Lady BEVERLY MELDER, along with an extensive list of other dignitaries, greeted guests.

Members of the FOTFF board scurried about, assuring that visitors were comfortable, almost pampered.

Artist KATHLEEN ROWLAND set aside her paints and brushes for a bit, to drive a golf cart transporting visitors from parked vehicles.

FOTFF President DAVE CLEMENTS, clad in jeans and weathered boots, extended a welcoming hand, holding his constant camera in the other. Tall and lean, with collar length hair, Dave could have been a fighter at the Alamo in a different age.

Guests sat at white-clothed tables centered with Texas flags and red geraniums, listening to KEVIN BLACK play spirited anthems on his guitar, crowning his performance with an a capella version of “God Bless the U. S. A.”

After welcoming remarks from host Dean Bass, Tommy Metcalf, and others, Dave Clements introduced artist CRAIG CAMPOBELLA, sculptor of “THE TEXIAN,” 14-foot-tall bronze centerpiece of the flag park, and its companion work, Campobella’s bronze bust of Dr. Charles B. Stewart.

Craig’s talk merited some metal of its own.

He recounted the frustration of early Texans as the Mexican government increasingly encroached upon their land and freedom.

“Finally, they said ‘no more,’ and they stood together to fight that intrusion,” Craig said.

He went on to tell of his own return to Texas (born in Houston), after a stay in California.

He was driving along Highway 101 during a spring day, listening to music that reminded him of Texas. He became overwhelmingly homesick, “so I came home,” Craig said in that deep, resonating voice, also familiar inside the Owen Theatre.

The emotional crowd opened its collective checkbooks to support FOTFF.

Even under a hazy sky, it was more than a Texas kind of afternoon; it was a statement, the type that Texans are known for.

KAREN STRONG was acknowledged as designer of the FOTFF website.

Tax deducible contributions for FOTFF are earnestly sought, with every amount appreciated. Sustaining members may contribute $25 yearly, or purchase a lifetime membership for $250. Student memberships annually cost $10. All who give $500 or more at one time become recognized Lifetime Individual Founding Patrons. Corporate contributions of $1,000 or more earn designation as Founding Corporate Patrons.

After all, the Lone Star Monument and Historical Flag Park in Conroe really is a destination park for Texas America, and an emblem of the American spirit.